The double standard and hypocrisy of luxury brands could hardly be more blatant given the speed exodus of leading jewelers from Moscow after the Russian invasion of Ukraine and their silence in the face of the growing death toll among Palestinian civilians and those resisting Israeli attacks and the occupation of the West Bank and Gaza.

Although a Press release by the Kimberley Process Civil Society Coalition makes a number of important points about diamond revenues, rough or polished, the mutilation of women and children, the funding of dispossession and occupation being labeled conflict-free the statement cites Russia and stops short of naming Israel, but the parallels are there for all to see.

Five weeks after the invasion, Ukrainian President Zelensky called for sanctions on diamonds that fund Russian occupation and war crimes.

After decades of Israeli occupation and war crimes, the Palestinian president has yet to call for sanctions on one of Israel’s main exports, the biggest net source of foreign currency needed to sustain and enforce the project of colonial apartheid in Palestine.

The case for sanctioning Israeli diamonds is much more pressing given that diamonds are a much larger source of funding for apartheid and war crimes in Palestine.

Unless and until Palestinian civil society calls for sanctions on Israeli diamonds, neither the Kimberley Process nor the jewelers will do anything to end the Israeli diamond trade.

But while each member has veto power, the KP will never agree to impose sanctions on Israeli diamonds, just as it was unable to agree to sanction Russian diamonds.

However, leading jewelers, including Tiffany’s, Cartier, De Beers, Signet Jewelers and others, moved quickly to cut Russian diamonds from their supply chains once the link to war crimes in Ukraine arose. been revealed. The same will happen to Israeli diamonds if consumers are made aware of the industry’s role in financing the apartheid colonial regime that killed more than 160 Palestinians including 20 children in the West Bank so far this year.

Companies have heavy fiduciary responsibilities and must ensure that their supply chains do not contribute to violations of international human rights law or international humanitarian law, a fact illustrated by the prosecution of leaders of the Swedish company Lundin Energy.

Consumers are kept in the dark about diamond exchanges that fund Israeli apartheid and war crimes that flood the market labeled conflict-free. Industry and invested governments have created a matrix of Schemascodes of practice, principles of good practice and a system of safeguards that facilitate concealment. 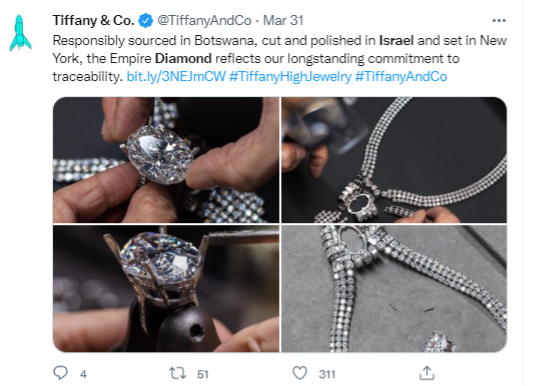 Israel is a major player in the global diamond industry, both as a trader of rough diamonds and as a manufacturer of cut and polished diamonds.

Until 2014, Israel imported around $5 billion in rough diamonds each year from Africa, Russia and Canada. Many are imported via Antwerp.

In 2014, Israel’s diamond exports were worth more than $21 billion gross ($11 billion net) and accounted for 30% of manufacturing exports.

Since 2014, Israel diamond exports have fallen sharply. Even before Covid they were falling, down 21% to $2.62 billion in the first nine months of 2019.

With the normalization of relations with the United Arab Emirates, a major hub for the diamond trade, the Israeli authorities hope revive the diamond industry. The trade has recovered strongly in the first half of 2022.

Supporters of Palestinian human rights have pressured companies to divest from Israel’s diamond industry. Since 2019, Anglo American, owner of De Beers, has been under pressure from militant shareholders who have set out the company’s claims that their diamonds are conflict free. Some of De Beers’ business partners have directly funded the Israeli military.

In 2020, De Beers divested ABT Diamonds Ltd. a few weeks later shareholders filed a complaint with Advertising Standards UK citing the company for making significant donations to the Israeli military.

In 2017 Tiffany and Co. ceded of a mine owned by Beny Steinmetz in Sierra Leone after activists revealed the link to the Givati ​​Brigade responsible for the Samouni family massacre in Gaza.

In 2014 Sotheby’s had to take back the Steinmetz Pink diamond they auctioned off months earlier for a world record $83 million. The buyers defaulted without penalty or explanation. Months before the auction, a registered letter and email was sent to the CEO of Sotheby’s warning of the risk to the company’s brand and reputation posed by their partnership with the Steinmetz Diamond Group. 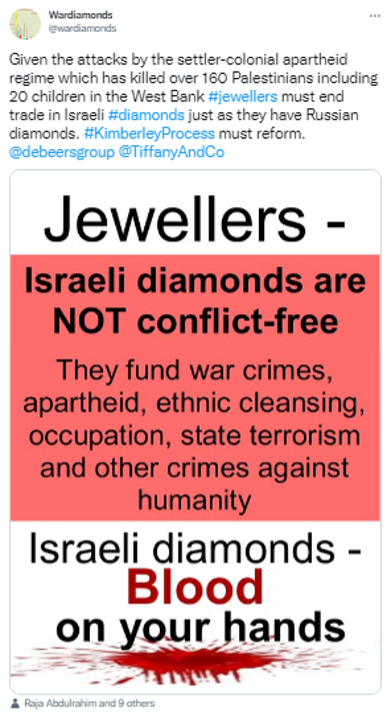 Around the same time, the long-established Steinmetz Diamond Group was renamed Diacore in a move that distances major jewelry brands De Beers, Tiffany’s and Sotheby’s from the Steinmetz brand and the massacre of the Samouni family.

The Kimberley Process Civil Society Coalition (KPCSC) is an arm of the Kimberley Process Tripartite Certification Scheme with the World Diamond Council and the 80 Member States who are the only ones with voting rights – each with a veto to block changes they don’t agree with.

The KP was unable to reach an agreement to change the definition of a “conflict diamond” which is limited to rough diamonds that fund rebel violence against legitimate governments. Blood diamonds that fund war crimes or crimes against humanity by government forces escape regulation and are labeled conflict-free.

Palestinians are not represented in the KPCSC and therefore their voices are not heard around the KP table when vested governments decide which blood diamonds should be banned and which can be labeled conflict-free.

Palestinians have arguably suffered longer and far more than any other community affected by the diamond industry.

No other community has suffered the devastation, loss and horrific suffering caused by the multiple bombardments of Gaza from land, sea and air.

No other community has had to endure the cold-blooded murder of thousands of children and innocent civilians, including journalists and doctors, as well as blatant discrimination, oppression, home demolitions, attacks by settlers and authorities, theft of land and resources, and arbitrary arrests and detentions. without charge or trial as the Palestinians did.

The diamonds that are a major source of funding for an apartheid regime guilty of serious human rights violations are just as bloody as those that fund rogue regimes in Africa or Russia.

The platitudes only emboldened Israel. Palestinian civil society should demand that the jewelry industry end Israel’s diamond trade that subjugates and brutalizes them daily. 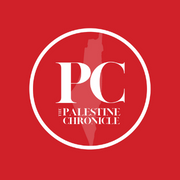 – Sean Clinton is an Irish human rights activist with a particular interest in Israel/Palestine and the role diamonds play in funding the Zionist project in Palestine. He has authored several articles on the double standard in the diamond industry that facilitates the trade in cut and polished blood diamonds. He contributed this article to PalestineChronicle.com.